Some brave Republican governors are risking it all to take a stand against Comrade Barry and his $787 billion Socialist stimulus bill to ruin America.
These true American heroes have had enough of his pork-filled spendulus package and are threatening to reject the money available for education, health care and infrastructure in their states. Now that takes courage.

The kind of courage that puts conservative ideology far ahead of the needs of struggling, everyday Americans. So what if their states face some of the most crushing budget deficits, soaring unemployment, and staggering foreclosure rates in the entire country?

These patriotic governors face an even bigger obstacle. Like how to put their own political aspirations (Can you say White House 2012?) ahead of the needs of their states...without looking like a total Dick Cheney.

"I think the problem that was created with too much debt will never be solved by adding yet more debt. I think there are a number of wrinkles that have caused a number of us to say 'Wait a minute, let's take a long look at whether or not this really makes sense for our state.'"

Still, Sanford said he would accept the funds.

"Being against it doesn't preclude taking the money."

Of course it doesn't. The same way it doesn't make you a hypocrite either. 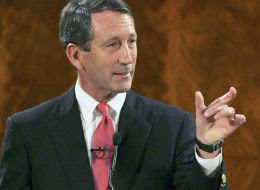 Well, Maybe Just This Much
Posted by imissamerica at 12:52 PM

Gosh--if they are going to cause an uproar about it, at least don't be complete hypocrites. I used to be a Republican back in the day but I can no longer affiliate with such a disgraceful party.