Dangerous? Not This Dick

Still Vice-President Dick Cheney continued to convince the public he is in fact the Antichrist, and most likely, not even human.

In an interview with Fox News (who else?), Dick Cheney was his usual happy-go-lucky self, defending his destructive war on terror, aggressive consolidation of executive power, and unprecedented gutting of the constitution with hearty laughs and a contagious smile.

In between breathing fire and praising other beloved Bush administration officials like Defense Secretary Donald Rumsfeld, Dick found time to hit back at vice-president elect Joe "No Bull" Biden for calling him, "The most dangerous vice president we've had probably in American history."

What Mr. Cheney does take seriously however is the security of this freedom-loving nation. Including the ability of the U.S. President to launch a devastating attack in case of emergency.

Or at least the world people live in. Dick, on the other hand, lives in an underground lair where crops are fertilized using the remains of pesky Democrats, anti-war hippies, and other liberal undesirables.

But then again vice-president elect Joe Biden has a history of saying "dangerous" things. 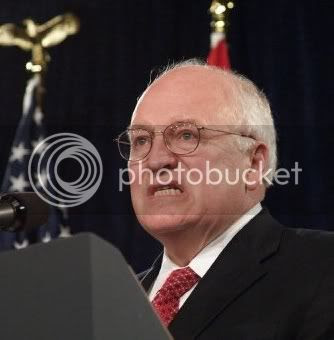 A Face Only A Mother Could Love

Posted by imissamerica at 12:00 AM